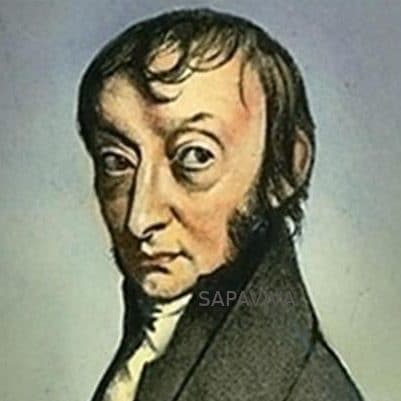 Lorenzo Romano Amedeo Carlo Avogadro (August 9, 1776 to July 9, 1856)  Avogadro is famous for Avogadro’s Law, which states that two gases of equal volume at the same temperature and pressure contain an equal number of molecules. In honor of him, the number of molecules in a mole of a substance is called Avogadro’s number.  Avogadro, who was of noble birth, obtained a degree in ecclesiastical law and started practice in that field, before deciding to pursue a scientific career. At that time, the existence of atoms and molecules was still hypothetical and very controversial.  Experiments of Joseph Gay-Lussac had shown that gases reacted in simple integer ratios of volumes. For example, when two liters of hydrogen gas reacted with one liter of oxygen gas two liters of water vapor were produced.  Avogadro correctly interpreted these results in terms of his hypothesis that equal volumes of gas contain equal numbers of molecules. For example, the reaction of hydrogen and oxygen can be understood, if hydrogen and oxygen molecules are diatomic, as resulting from this molecular reaction:  2H2 + O2  → 2 H2O.  Avogadro’s work was largely ignored during his lifetime but became known shortly after his death and eventually his ideas were shown to be correct.  Little is known about Avogadro’s private life, but his obituary in the Gazzetta Piemontese nine days after his death says that he was “religioso senza intolleranza, dotto senza pedanteria” (“religious without intolerance, learned without pedantry”).