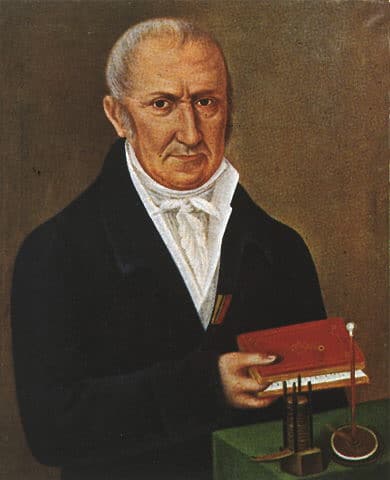 Alessandro Volta (February 18, 1745 to March 5, 1827) Volta was an Italian scientist, who is most famous for his invention in 1800 of the first battery, which was called a “voltaic pile.”  A voltaic pile was a stack of electrochemical cells, each of which consisted of an electrolyte-soaked paper sandwiched between two different metals, such as zinc and copper. Volta’s invention of the battery made possible further progress in electromagnetic research as well as in chemistry. Electrical currents produced by voltaic cells were used to split chemical compounds through electrolysis and isolate new chemical elements. (In 1807-8, Sir Humphrey Davy used this method to discover sodium, potassium, boron, barium, calcium, magnesium, and strontium.) In honor of Volta’s researches in electricity, the Standard International unit of electrical potential (the “volt”) was named after him. Volta also made other scientific contributions, including discovering and isolating the gas methane.  Volta gave testimony to his religious beliefs in a letter sent on Jan 6, 1815 to the Canon Giacomo Ciceri, in which he declared,

“I have, indeed, and only too often, failed in the performance of those good works which are the mark of a Catholic Christian, and I have been guilty of many sins; but through the special mercy of God I have never, as far as I know, wavered in my faith. … I constantly give thanks to God, who has infused into me this belief in which I desire to live and die, with the firm hope of eternal life. In this faith I recognize a pure gift of God, a supernatural grace.  But I have not neglected those human means which confirm belief.”