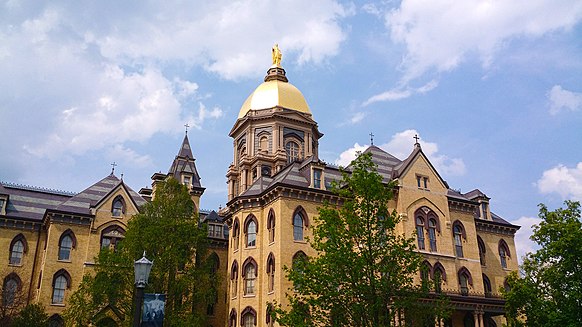 The third annual conference of the Society of Catholic Scientists was held on June 7-9, 2019 at the University of Notre Dame in South Bend, IN, USA.

The theme of the conference was “What does it mean to be human?”  This included such questions as What is “human nature”? When did it appear? Did Neanderthals and other archaic species of Homo have it? When does an individual human life begin? Can human nature be changed by genetic engineering? In what ways are humans unique on earth? Are we unique in the cosmos?  These questions were explored from the point of view of biology, paleoanthropology, philosophy, theology, and other disciplines.

11:30  “The Science behind Ancestry Mapping: what can it tell us about our human nature?”  Benjamin Rybicki  (Henry Ford Cancer Institute)

3:45  “To Look to the Heavens: Galileo on the Potential of the Human MInd”  Lawrence Machia, O.S.B, and Daniel Vanden Berk (St. Vincent College)

10:00 “Created in the Image and Likeness of Man”  Megan Levis (University of Notre Dame) (McKenna Auditorium)

Nicanor Austriaco, O.P., is Professor in the Department of Biology of Providence College. He received his Ph.D. in biology from MIT in 1996 and does research in experimental molecular biology, especially programmed cell death in unicellular eukaryotes. He is a priest of the Order of Preachers (Dominicans) and holds a doctorate in theology from the Univ. of Fribourg in Switzerland. Among other distinctions he is an investigator in the NIH-Rhode Island Idea Network of Biomedical Research Excellence Program. He is the author of Biomedicine and Beatitude: An Introduction to Catholic Bioethics (CUA Press, 2011) and co-author of Thomistic Evolution: a Catholic approach to understanding evolution in the light of faith (Cluny Media, 2016). Prof. Austriaco is on the Board of SCS.

Richard Austin Choate is a graduate student in theology at the Institute for Orthodox Christian Studies, Cambridge, working on his doctoral thesis “Theosemiotics, Peirce, Perichoresis, and St. John of Damascus.” He is a Scholar Associate of SCS.

Maureen Condic is an Associate Professor of Neurobiology at the University of Utah, with an adjunct appointment in Pediatrics. She received her undergraduate degree from the University of Chicago and her doctorate from the University of California, Berkeley. Her research focuses on the role of stem cells in development and regeneration and has been recognized by both the Basil O’Connor and the McKnight awards. She is currently a member of Pontifical Academy for Life, and in 2018, was appointed by the President of the United States to the National Science Board. Dr. Condic has recently co-authored a book with her brother Samuel, entitled Human Embryos, Human Beings, that explores the nature of the human embryo from a scientific and philosophical perspective. Her second book, Untangling Twinning, considers the biologic and philosophic issues raised by human twinning, and is due to appear in the summer of 2019. Dr. Condic participates in both graduate and medical education, having taught Human Embryology in the Medical School for 20 years. She has a strong commitment to public education, and has presented over 250 seminars and interviews, both nationally and internationally, on science policy, bioethics and her own research. Prof. Condic is a member of SCS.

Conor Cunningham is Associate Professor in Theology and Philosophy, and Director of the Centre of Theology and Philosophy, University of Nottingham. Prof. Cunningham has degrees in Law, Philosophy, and Theology. He did his PhD at the University of Cambridge. His prize-winning research has been translated into many languages including: French, Polish, Chinese, Spanish, Korean, and Russian. He is the author of Genealogy of Nihilism: Philosophies of Nothing and the Difference of Theology (2002), He is also the author of the award-winning book Darwin’s Pious Idea: Why the Ultra Darwinists and Creationists Both Get it Wrong (2010).The third part of this trilogy is forthcoming: Soul and the Marriage of Discourse: The Return of Scientia. In addition, Prof. Cunningham was the writer and presenter of the multi-award-winning BBC documentary “Did Darwin Kill God?”

Sonsoles de Lacalle is Associate Professor of Biomedical Sciences at Ohio University and Director of the Office of Advanced Studies in Ohio University’s Heritage College of Osteopathic Medicine. She received both an MD and a PhD from the University of Navarre in Spain, after which she did postdoctoral work at the University of Chicago. Her research is in the field of neuroscience, focusing on the field of aging and dementia and the effects of estrogen on brain cells. Prof. de Lacalle is a member of SCS.

Michael F. Flynn is an award-winning science fiction writer.  After receiving a masters degree in mathematics from Marquette University (in general topology), he had a long and successful career as a quality engineer and consultant on statistical methods. He is the author of more than 70 stories and articles and 15 novels and story collections.  He is best known for the novel Eifelheim and the recent Spiral Arms series.  He has been nominated seven times for science fiction’s Hugo Award and received the Robert A. Heinlein Award for his body of work and the Sturgeon Prize for the short story “House of Dreams.” In addition, he has received the Seiun Award from Japan and the Prix Julie Verlanger from France, both for translations of Eifelheim.  His most recent book is the collection Captive Dreams, six interlocked stories dealing with issues of morality and technology.. His most recent short story “Nexus” is reprinted in the 35th annual The Year’s Best Science Fiction.  The Encyclopedia of Science Fiction calls him “a central modern creator of Hard SF.”  His novel Eifelheim is a theologically, scientifically, and historically sophisticated story about the encounter between a medieval Christian village and extraterrestrials.

Marie I. George is Professor of Philosophy at St. John’s University, NY. She received her Ph.D. in philosophy from Laval University. She also holds Masters degrees in biology and in pastoral theology. An Aristotelian-Thomist, her interests lie primarily in the areas of natural philosophy and philosophy of science. She has received several awards from the John Templeton foundation for her work in science and religion, and in 2007 was co-recipient of a grant from the Center for Theology and the Natural Sciences (CTNS) for an interdisciplinary project entitled “The Evolution of Sympathy and Morality.” Professor George has authored over 70 peer-reviewed articles and two books: Christianity and Extraterrestrials? A Catholic Perspective (2005) and Stewardship of Creation (2009), as well as editing The Essential Guide to Catholic Spiritual Classics (2017). She is a Thomistic Institute speaker and the assistant editor of the Long Island Botanical Society newsletter. Prof. George is a Scholar Associate of SCS.

Megan Levis is a fourth year doctoral student in  Bioengineering at the University of Notre Dame in the field of tissue engineering. Her research focusses on the pathways involved in mechanical signaling during tissue growth, development, and healing after injury. Megan also designs microfluidic devices to mechanically and chemcally perturb multicellular systems. She is a graduate student member of SCS.

Lawrence Machia, O.S.B., is priest of the Order of St. Benedict. He holds an MDiv and an MA in Theology from St. Vincent Seminary. His master’s thesis research was on Galileo’s Letter to Christina and its place in Catholic intellectual tradition. He is currently studying undergraduate physics at St. Vincent College in preparation for graduate studies in astronomy and astrophysics. Fr. Machia is a student member of SCS.

Steven J. Mithen is Professor of Early Prehistory at the University of Reading in the UK. His research concerns human evolution and early prehistoric communities, with a focus on the evolution of intelligence, language and music, and the emergence of farming communities. He has long-term archaeological field projects in Southern Jordan and Western Scotland. His books include The Prehistory of the Mind (1996), After The Ice: A Global Human History 20,000-5000 BC (2003), The Singing Neanderthals (2005), Thirst: Water and Power in the Ancient World (2012), and WF16: Excavations at An Early Neolithic Settlement in Southern Jordan (2018). Prof. Mithen has served as Pro-Vice Chancellor and Deputy Vice Chancellor at the University of Reading. He was elected as a Fellow of the British Academy in 2003.

Christopher Raub is Asst. Professor of Biomedical Engineering at the Catholic University of America. He received his PhD in 2009 from UC Irvine, and did postdoctoral work at UC Davis and the University of Southern California. Dr. Raub’s research merges tissue engineering, biomedical optics, and microfluidics to study cell and matrix dynamics noninvasively and relate microscale features to macroscale tissue mechanics. Prof. Raub is a member of SCS.

Benjamin Rybicki is Senior Research Scientist in the Department of Public Health Services at Henry Ford Hospital in Detroit. He received his PhD in Epidemiology from University of Michigan in 1996. His research focusses primarily on the epidemiology, demographics, and genetics of a variety of diseases, including sarcoidosis, Parkinson’s disease, and prostate cancer. Dr. Rybicki is a member of SCS.

Daniel Vanden Berk is Assoc. Professor of Physics at St. Vincent College. He received his PhD in Astronomy and Astrophysics in 1997 from the University of Chicago. His research focusses on gamma-ray bursts, quasars and active galaxies, sky surveys, statistical analysis of large data sets, the intergalactic medium, and ultraviolet astronomy. Prof. Venden Berk is a member of SCS.

aleteia story on SCS and 2019 conference

Podcasts of Interviews with speakers: